Free access to the portal Blog Arjan Kuipers Linda Radestad About Us Brain.rehab books Come and train with us! Coaching programs Login

Having trained under Frederick Carrick and meeting with him many times over the last 25 years did not mean that I was completely at ease with the task at hand: Interviewing the grandmaster of eye movement analysis and applying treatment regimes using the eyes to improve neurological conditions.

Somehow he always surprised me by going to the next level. The moment I thought I had the handle on a complex matter, he just moved up gears and I had to hang in there to be able to understand how to apply the new knowledge that he shared.

I have always had great respect for him, most of all because of the way he gave patients hope (wherever possible) and his unique way of coming up with novel treatment methods. He also was one of the first to diagnose my mother, who had suffered a series of concussions, correctly (something the neurologists in Holland not even remotely managed to do at the time)This made treatment of her much more purposeful and improved her quality of life enormously.

The interview was held at Carrick Institute headquarters in Cape Canaveral Florida, the topic of the interview: “Eye-Movement Training Results in Changes in qEEG and NIH Stroke Scale in Subjects Suffering from Acute Middle Cerebral Artery Ischemic Stroke: A Randomized Control Trial”

The following questions were covered during the interview:

Writing down what exactly was said would probably not do justice to the unique way Frederick (Ted) Carrick answers questions, so you have to see and listen to it yourself by clicking the video below when it is released.

In summary prof. Carrick paints a detailed (but understandable) picture of how the study was conducted, why it was done and what the results mean. In the study that he designed, survivors of a middle cerebral artery stroke were asked in the hospital setting right after their stroke to participate in a simple eye exercise routine that they repeated several times a day for 3 minutes. The eye exercises were designed to address the areas affected by the stroke as well as more remote related areas (for example in the opposite cerebellum).

The results showed on the NIHSS stroke scale as well as in brain activity mapping through so-called qEEG (a series of electrodes on the head measuring brain activity) that there were significant changes in the participants that were doing the eye exercises, not in those that received the normal standard of care. This in fact is the first time that a study of this kind was conducted with stroke survivors. Although perhaps a little premature, in research there is always the need for more studies, the results are very promising for devising better solutions for stroke survivors.

In addition to his elaborate explanation of the study, he talked about the significance of the use of eye movement training in stroke and neurological rehabilitation after brain injury. He explained in a way, that most will be able to understand, why eye movements, in particular, are the place to go to when looking for easy to apply (but with a precise and powerful effect0 exercises for neurological conditions.

The information we received during the interview was certainly worth traveling to Cape Canaveral for. Later we will add video training explaining more about the use of eye exercises in stroke and brain injury. In brain.rehab centers we make use of this knowledge alongside other advanced training and treatment strategies. 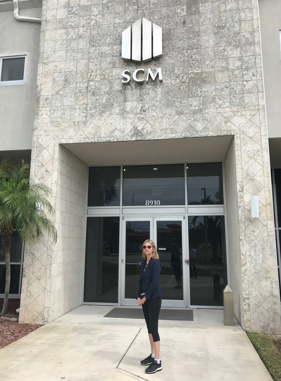 We will keep you updated in this blog section and the brain.rehab training portal on follow-ups of this research, and other studies using eye movement training for stroke and traumatic brain injury.

*Professor Carrick is professor of neurology at the Florida Central University, Roland Blaauw professor of neurology at the Carrick Institute and senior research fellow for mental disorders in collaboration with Cambridge University. He is considered by most to be the founder of functional neurology and one of the worlds leading experts on eye movement analysis and training in neurological conditions. He is among others known for his pioneering work with top athletes after concussion.