Free access to the portal Come and train with us! Blog Arjan Kuipers Linda Radestad About Us Donations Training for Professionals Login 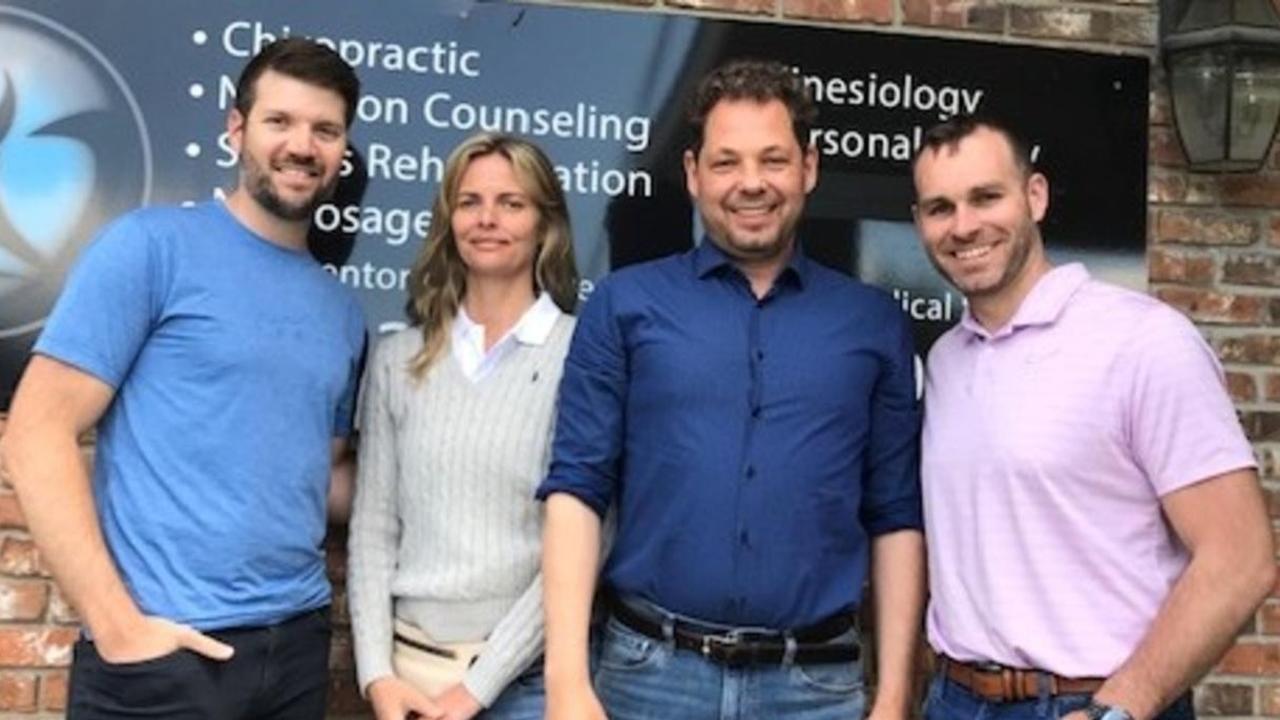 Some weeks ago we already met Kyle Daigle and Brandon Crawford in Barcelona while on a course about neurodevelopment. They had sparked our interest with the way they stimulate brain function and recovery using laser and a virtual reality system.

We had already learned that the National Health Services in the UK were very interested in the so-called Neuro sage system for pain control after a pilot study showed a significant pain reduction using the Neuro sage system. Now we were about to learn more about these two systems and how they can be used for stroke and brain injury recovery, in their birthplace.

We were visiting the neuro-rehabilitation clinic of Kyle in Lake Charles Louisiana. Luckily we choose the right date, Good Friday, a day that most people in Louisiana take off. We had the clinic for ourselves and plenty of time to find out more about the two novel ways to enhance plus recover brain function. After a tour around Kyle’s clinic, Kyle and Brandon (his clinic is in Austin TX) were going to treat and stimulate Linda with the laser and Neurosage system.

Because we want to try everything that we use in the brain.rehab centers ourselves first, Linda volunteered to see how the systems work. This type of muti modal approach takes on average 15-20 minutes, but can be shorter when tolerance to stimulation is lower. Multimodal means that more then one stimulation is given at the same time. 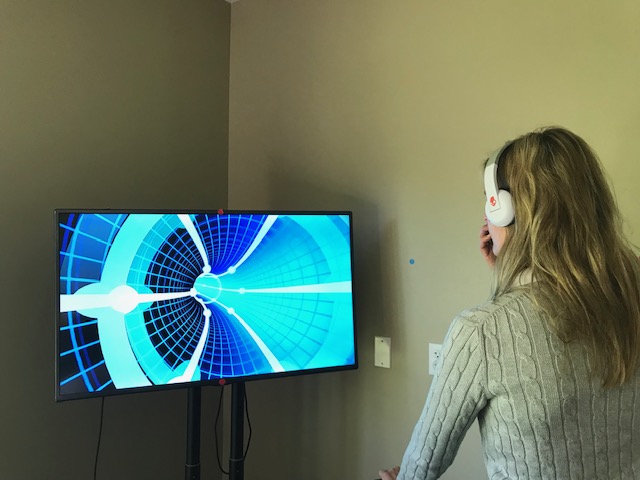 The typical approach Brandon and Kyle developed, involves visual, auditory, vibratory and photo-biomodulation (red light and infrared) stimulation to not only activate weak areas in the brain, but also speeding up recovery at a cellular level. In contrast to popular believe, infrared and red light frequencies pass relatively easy through the skull and basically can help to speed up and help the inbuild recovery process, especially of the mitochondria (the energy factories) without which we would not even survive for more than a couple of seconds (The shed light laser is of particular interest for me as a clinician because it can be carried around instead of being placed in a fixed work station). 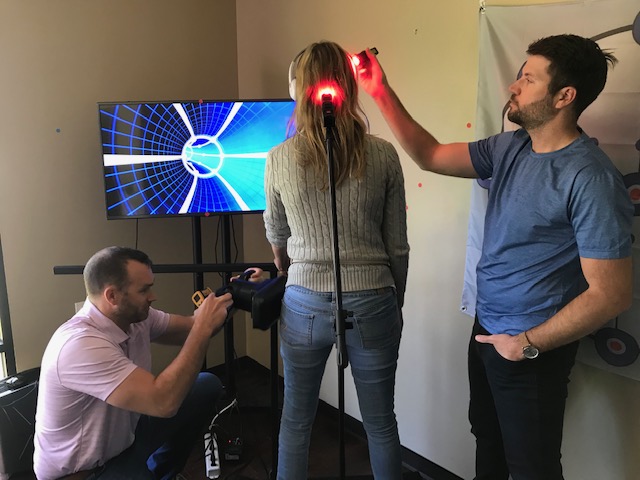 Especially the red light frequencies appear to be the most effective to stimulate the brain.  And do not be alarmed at the word laser. The type of laser used to stimulate the brain is a type three class laser, which is considered safe and is FDA approved and has been shown to help the healing process even years after the tissue has been injured. Brendon and Kyle use a so-called hemisphere specific approach (that we already explained in previous blogs) which ensures that the weaker areas are stimulated and not the already better functioning areas. In practice, this means that the body and brain are stimulated more from one site (usually opposite sites, which you can see in action on the included pictures.

Both Neurosage and shed light laser systems are highly adaptable and can tune into several frequencies which makes sense when addressing different tissue areas (for example the higher brain centers (eg. Neocortex) react better to a higher frequency than, for example, the cerebellum (little brain).

The Neurosage system is especially interesting because it has among others inbuild properties to reduce tremors, overactivity in the brain, and pain (as mentioned before) but also can address specific regions of the brain, by using, sound and light stimulation which is often combined with specific half sided vibratory stimulation of the body (vibration is one of the most powerful ways to stimulate the nervous system, read brain).

Exited by all of the new things we learned (and the most amazing Cajun food) we headed back to Houston airport to take a plane to Savannah, where our next interview would take place. 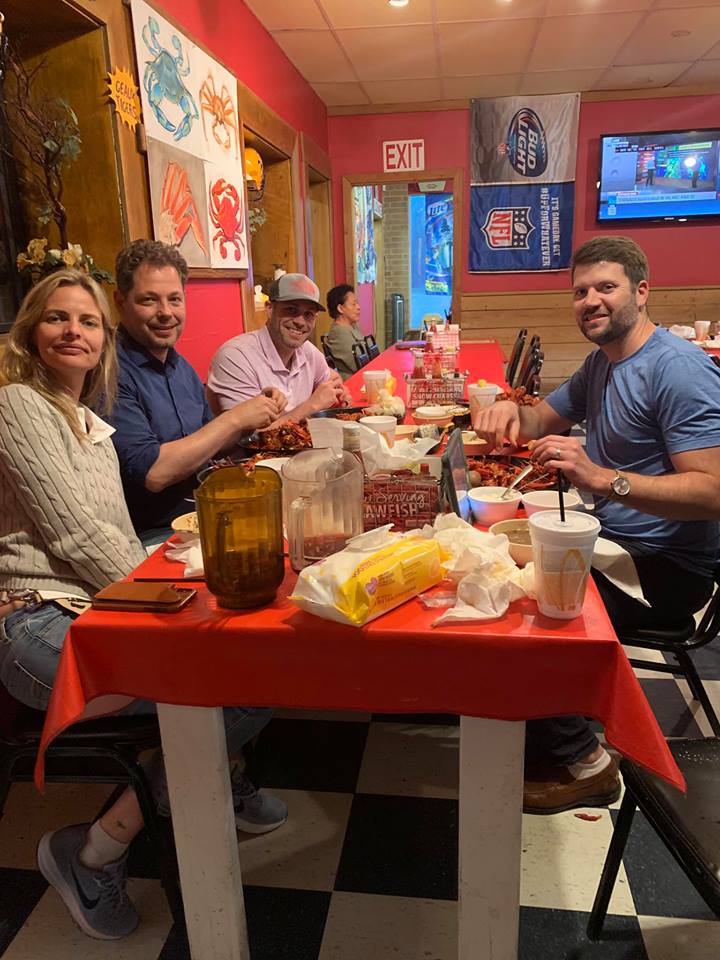 We will keep you updated on the use and results of both the Shed light laser and Neurosage system when we are going to use them in our lab and rehabilitation center and test the results ourselves using advanced biometric data collection.